You are using an outdated browser. Please upgrade your browser to improve your experience.

Kimbrell’s takes pride in providing exceptional service and quality for over 100 years. The current team has adhered to the proven policies established by the Kimbrell’s family since 1915. We truly believe in caring for our local communities and serving our customers to the best of our abilities.

Our mission is to deliver excellent customer service and provide the best dependable value furniture and financing for our customers. We strive to create long-lasting customer relationships and loyalty, and become our customer only choice for their furniture needs. 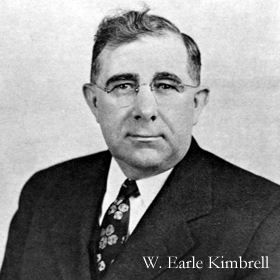 Nine years later, after acquiring several other stores, the business was sold. A few months later, Earle Kimbrell and several others organized the "Southern Factories and Stores Corporation" consisting of six stores in North and South Carolina. Barely making it through the Great Depression, the company reorganized and the name was changed to Kimbrell's, Inc. Benefiting from the reorganization and improving economic conditions, the Company prospered, paid off debts and began buying and opening new stores. 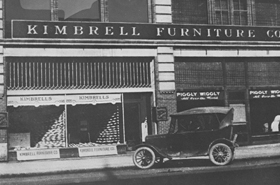 By 1940, there were eleven stores. World War II stopped expansion, but in 1946 new store growth resumed again, with the addition of six new stores and a central warehouse.

Mr. Earle Kimbrell was founder, president and general manager of the business for fifty years from 1915-1965. Many of the policies established during his tenure are very much alive today. Mr. Kimbrell maintained an active interest in the furniture industry, serving as president of the National Retail Furniture Association and as president of the Retail Credit Institute of America. In 1958, he received the Cavalier Award as the Outstanding Furniture Merchant of the Year.

Clarence Kimbrell succeeded his father as President in 1965. He continued the conservative but growth-oriented policies begun by his father and the company continued to thrive. By 1990, there were fifty retail stores in North and South Carolina and Georgia, with a central warehouse distribution facility and a general accounting and service office, both in Charlotte, NC. The growing continued, the company now owns a majority of its store buildings, the central warehouse and general office complex and has no outstanding debt. Clarence Kimbrell retired in 1984 after fifty-two years with the company. John Allan Kimbrell, his bother, succeeded him, continuing the value-oriented policies that had been so successful in the past. After his retirement in 1988, Henry L. Johnson, Jr., son-in-law of Clarence Kimbrell, became president and general manager.

The company is proud to employ over 500 associates in forty four cities and towns in North Carolina, South Carolina, and Georgia. Many are very involved in their individual communities in addition to their career with Kimbrell's.

The current management team continues to adhere to the proven policies established by Earle Kimbrell and the longtime associates who have collectively built Kimbrell's into a growing home furnishings retailer with strong finances and a talent for serving its customers with the best in dependable home furnishings and superior service.

Kimbrell’s makes it easy to do business with. Our focus is friendly customer service and easy financing

At Kimbrell’s, our customers are like family and we are honored to provide an unforgettable experience

With our customized payment options, we can fit your purchase for any budget